A common cause of low back pain that can be avoided

As a chiropractor I see many cases of lower back injury with one of the most common causes being bending incorrectly from the waist. In this article I share a simple strategy to decrease the chance of low back pain occurring during bending. 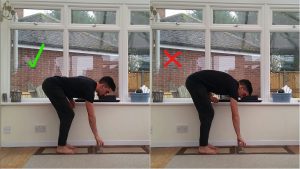 People often present with severe low back pain after feeling a twinge whilst bending over to pick something up off the ground. Usually, the object is light, such as a sock. At times they may have been bending over to accomplish a simple task such as turning off a power point or tying their shoelace.

The common feature is bending or flexing the lumbar spine. This places strain over the joints and soft tissues in the lower lumbar, posterior hip and pelvis areas. Each repetition of lumbar spinal flexion causes strain over and micro damage in these areas. Movement can remain pain free even though damage is occurring.  Pain is only triggered when the accumulation of small traumas from pain free movements reaches a threshold.

Flexing the lumbar spine must be avoided to prevent pain developing due to bending. This can be achieved by using a technique called a hip hinge (see image) to keep the lumbar spine neutral. A hip hinge is achieved by tilting the pelvis forward whilst bending forwards. If a hip hinge is combined with bending the knees correctly then the action to lower yourself to pick something up from below becomes more like a squat and the aberrant forces over the low back are significantly decreased. If this sounds like too much effort simply lunging down to pick something up will do the same job.

Back to Chiropractic News